The recent EU Landing obligation means that fishers must land all quota species and cannot discard them overboard. This has resulted in heightened pressure on fishers to increase their catch selectivity. The Queen Scallop Trawl Fishery is the second most valuable fishery in the Isle of Man. Even though this fishery has low bycatch levels, insufficient quotas for landing bycatch exist for species such as Haddock and Flatfish (Lemon Sole, Plaice, Dab). Landing these ‘choke’ species may therefore result in the inhibition of fishing and the unfulfillment of target species quotas.

Bycatch reduction devices can be implemented on fishing gear to increase catch selectivity. One such device is artificial light, where light can elicit differential behavioural responses in fish by

Using the latter knowledge, this scientific study used 6 LED lights attached to an escape-inducing square mesh panel (SMP) on an Otter Trawl, to determine whether catch selectivity could be increased. Lights were programmed to emit constant white light and fishing took place at 45-95m depth.

The addition of light to the SMP increased catch selectivity by illuminating escape routes for non-target species whilst still retaining the catch weight of the desired species. Light could allow fishing vessels to effectively comply with the landing obligation. 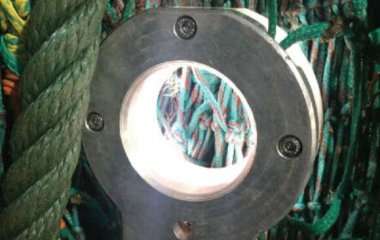